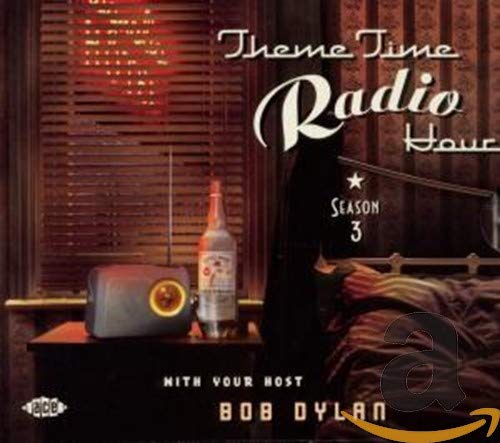 View on Amazon
Forget it if you want to hear Dylan. He is nowhere to be found on this recording I returned this because I wanted to hear Dylan!

i love the music

While Ace's take on Theme Time Radio Hour provided access to a number of gems, not the least of which was Mary Gauthier's incredible "I Drink" this third two-disc set is far less eclectic with a number of tracks - Elvis' "Little Sister", Bessie Banks "Go Now", The Crickets' original of "I Fought The Law", together with the Fats Domino and Willie Nelson tracks widely available. While there are obscurities like Jerry Lee Lewis' "Lust of the Blood", these are forgettable rather than unheard gems. So, with the apparent decision to call it quits at Volume 3, Ace will move its formidable talents onto other activities - including a planned 2011 CD of unissued Stax tracks from Booker T. and the MGs.

Nowhere, on this album, do I hear the gravelly tones of Bob's voice laying down the wry comments that we listeners all think we're going to hear as part of buying 'Theme Time Radio Hour WITH YOUR HOST BOB DYLAN' (????????)
Don't buy this series (Season One and Two are the same) if you think you're going to get Bob along for the show. Sad news folks.

I was expecting the "Bob Dylan Theme Time Radio Hour," not just the music he selected for the show. I was very disappointed. Bob Dylan was not "hosting" anything on the CD.

Really?...not with Bob Dylan...not on my CD...this is just a collection of songs on the shows...i can get these elsewhere...i paid to hear elvis do 'little sister'...yuk!..what a bummer...buyer beware...as a famous songwriter once wrote "its sugar for sugar, salt for salt, if you go down in the flood its gonna be your fault"...you been warned amigos...

I thoroughly enjoyed this compilation by Ace Records based on theme time radio.

Sent back as no voice of Bob Dylan on it. Misrepresented

It states on the cover that it is "with your host Bob Dylan" but it is not hosted by him.