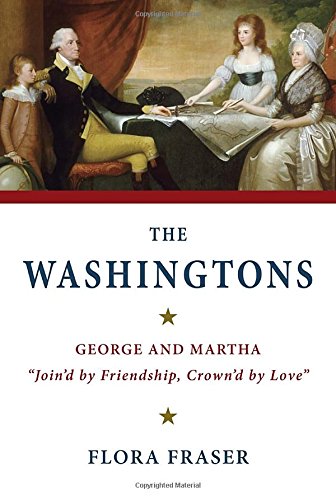 The Washingtons: George and Martha, "Join'd by Friendship, Crown'd by Love"

The Washingtons’ long union begins in colonial Virginia in 1759, when George Washington woos and weds Martha Dandridge Parke Custis, a pretty, charming, and very rich young widow. The calm early years of their marriage as plantation owners at Mount Vernon and as parents to Martha’s two children, Jacky and Patsy—both of whom present difficult challenges—yield to harsher times. Washington has been prominent among Virginians in opposing British government measures, and at the outbreak of fighting in 1775 he is elected commander-in-chief of the Continental army. The war sees Martha resolutely supporting her husband, sharing in the hardships at Valley Forge and other wretched winter headquarters. Essential to George’s personal well-being, she is known as “Lady Washington”—a redoubtable and vastly admired figure in her own right.

Flora Fraser provides us with a brilliant account of the public Washington and of the war he waged, and gives us, as well, the domestic Washingtons, whether at Mount Vernon before and during the war or in New York and Philadelphia during his presidency. Even in wartime, Martha manages to scour Philadelphia to find a doll for her newest granddaughter and keeps careful control of her Virginia inheritance. George grapples with a formidable enemy, without proper troops and often without basic supplies—his soldiers frequently lack rations, blankets, even shoes—while always fearful for his wife’s welfare and safety, given the constant worry that the British might descend on Mount Vernon. Even so, a true Virginian, he manages to dance for more than three hours with Alexander Hamilton’s pretty young wife at a makeshift ball.

With victory and the arrival of peace in 1783, the Washingtons hope to remain at home, a hope dashed when, in 1789, George is elected our first president and Martha becomes a faultless first First Lady. During the presidency, they together negotiate the many pitfalls of establishing republican entertainment—the weekly “Congress dinner,” levées, and drawing rooms—before, finally free of official responsibilities after Washington’s second term, they are at last able to retreat to their beloved Mount Vernon.

This is a remarkable story of a remarkable pair as well as a gripping narrative of the birth of a nation—a major, and vastly appealing, contribution to the literature of our founding fathers . . . and founding mother.
View on Amazon
It's hard to believe that, after two and a half centuries of books about George Washington, a new work could be fresh and innovatively revealing. Well, such is the case with historian Flora Fraser's diligently researched study of the Washington marriage. Set against turbulent times, the book reminds us of the mundane-to-tragic personal concerns that shaped daily life. While great events get their due, we also meet a Virginia planter never quite free of money concerns, with a frustrating step-son and, blessedly, a good and rewarding marriage. It's fascinating to encounter those times afresh, from a very different perspective, and I found this book well worth reading. I recommend it strongly and must add that I've bought an additional copy for my in-laws as a Christmas gift (they're among the dwindling number of Americans who take our nation's history seriously). The only "downside" is that reading this book has forced me to steal time from a busy schedule to revisit Mt. Vernon and experience it anew with a deeper knowledge of the human beings behind the iconic paintings. Very well done!

While an entertaining read, I found the lack of detail about the personal lives of George and Martha Washington disappointing. The book clarified some misconceptions, e.g. Martha, while she was indeed older than George, the age difference was only a few months. We learn that Martha and George were often together in winter camp during the Revolutionary War, but little about their interactions with others or each other. Unfortunately, of course, they both destroyed most of their personal correspondence, but surely there are letters or memoirs of people who stayed with them and dined with them when they were both already held in high esteem. I would have enjoyed reading more about those interactions than merely that Martha had grown plump, or that George remained largely silent. Perhaps this book is the result of the lack of such information, but that is hard to believe in an age of letters and diaries.

The communications between George and his siblings, and with his step-children are enlightening, not only as to their relationships, but as to George's values and economic sense. I came away with a better knowledge of those interactions than of those between the couple. Unlike some of the other reviewers, I thought the information about the purchases of goods from overseas very informative. The Washingtons wanted quality and fashion. There was vanity and nobility in the household, and the Washingtons' interactions with their agents and the items they sought fills out those traits, and their personal tastes in consumer goods.

The book yields a better sense of the household and its operations, and of the relationships among the extended family. The relations between George and Martha are still veiled, at best, and that may be how it remains (it was certainly how they wished.) All in all a good read, and worth the time.

This is an interesting overview of the Washingtons and their time period, without feeling too much like a history textbook. I learned a few new interesting things about both George and Martha. One can appreciate and be reminded of the exemplary contributions and sacrifices each was willing to make. Relationships within and outside the family are brought to life, as well as key historical and military events. An easy read even if history is not your favorite subject.

This is the story of a married couple. It was also the first time I read a detailed account of Martha's life and family background. I recommend it to all who are interested in American history and the lives of the "Founding Mothers" who gave as much as their husbands to our identity as a nation.

This book is exactly what I hoped and is exactly as it was described. I am using it for research about a book on how strong women support their husbands. My experience with this seller was excellent!