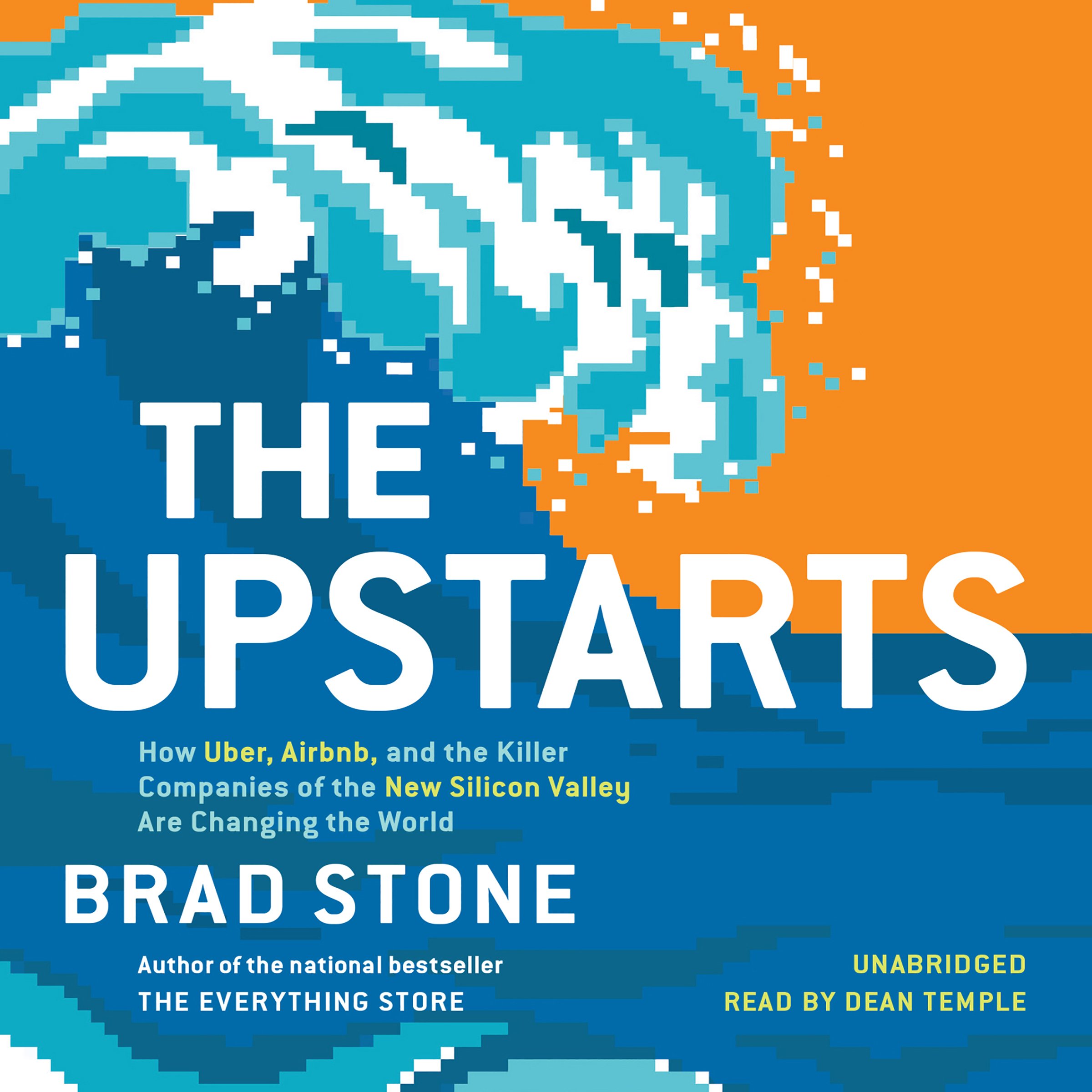 The Upstarts: How Uber, Airbnb, and the Killer Companies of the New Silicon Valley Are Changing the World

A look deep inside the new Silicon Valley from the New York Times best-selling author of The Everything Store.

Ten years ago the idea of getting into a stranger's car or walking into a stranger's home would have seemed bizarre and dangerous, but today it's as common as ordering a book online. Uber and Airbnb have ushered in a new era: redefining neighborhoods, challenging the way governments regulate business, and changing the way we travel. In the spirit of iconic Silicon Valley renegades like Steve Jobs and Bill Gates, another generation of entrepreneurs is using technology to upend convention and disrupt entire industries. These are the upstarts, idiosyncratic founders with limitless drive and an abundance of self-confidence. Led by such visionaries as Travis Kalanick of Uber and Brian Chesky of Airbnb, they are rewriting the rules of business and often sidestepping serious ethical and legal obstacles in the process.

The Upstarts is the definitive story of two new titans of business and a dawning age of tenacity, conflict, and wealth. In Brad Stone's riveting account of the most radical companies of the new Silicon Valley, we discover how it all happened and what it took to change the world.

View on Amazon
Many Americans, not to mention millions of people in other countries around the world, may find it difficult to imagine a world without Uber or Airbnb. Yet Uber was founded only in 2009 and Airbnb a year earlier. (Neither company’s success—or, for that matter, the sharing economy as a whole—would have been possible without the iPhone, which Apple introduced in 2007.) As the cover graphic suggests on Brad Stone’s captivating new book, The Upstarts: How Uber, Airbnb, and the Killer Companies of the New Silicon Valley Are Changing the World, these two iconic companies have been riding the wave of new and ever-improving technology.

Is this the sharing economy?

“Airbnb and Uber didn’t spawn ‘the sharing economy,'” Stone writes, “. . . so much as usher in a new trust economy, helping regular folks to negotiate transportation and accommodations in the age of ubiquitous internet access.” Even before going public, the two companies together were valued at close to $100 billion. There is no evidence that their principals have shared any appreciable portion of that wealth. Nor does it seem consistent with a gentle label such as “the sharing economy” for Uber to resist every effort to classify its drivers as employees and provide them with benefits.

Stone contends that “Together, these companies have come to embody a new business code that has forced local governments to question their faithfulness to the regulatory regimes of the past.” In the course of doing so, both companies have engaged in bare-knuckle fights with local governments around the world. For the most part, they’ve won. But not always. Stone tells the fascinating story, blow by blow.

The five men behind the two companies’ rise

Stone’s book is tightly focused on Uber and Airbnb, with digressions about the many companies that have tried to compete with them, with only meager success for the most part. In fact, in a sense, the book is about the two companies’ cofounders, and especially the two young men who have emerged as CEOs. Travis Kalanick runs Uber. Brian Chesky is at the helm at Airbnb. However, the two companies’ success may well be due as much to the contributions of their cofounders: Garrett Camp in the case of Uber, and Joe Gebbia and Nathan Blecharczyk in the case of Airbnb. All are featured in Stone’s account. They’re all billionaires now, many times over.

The trouble with Uber and Airbnb

Stone makes clear that many of the problems that have surfaced in the news media about Uber have been caused by its CEO. “Chronically combative” (and sometimes abusive), Travis Kalanick continues to generate negative publicity, seemingly on almost a daily basis. Here’s one recent example that emerged in The Guardian—an article about Kalanick’s abusive treatment of one of his company’s drivers. And here’s an even more recent report about the company’s use of software to evade police in at least five American cities and six other countries. These are not isolated instances of controversy surrounding the company: trouble seems to follow Uber with disturbing regularity.

Many of these reports reflect Kalanick’s combative personality, but there are other problems as well. For instance, Anna Weiner wrote in the Feb. 28, 2017 New Yorker about recent reports of sexual harassment at the company: “Uber is, in some ways, a model villain. The company has long inspired Schadenfreude. It has been accused of mishandling customer reports of sexual harassment by drivers.”

A shared reputation for aggression

As a result of the frequent, high-profile accounts of Uber’s misbehavior, Airbnb tends to be regarded more highly. But Stone argues that CEO Brian Chesky is frequently as aggressive as Kalanick. Neither has shied away from blatantly breaking local laws or confronting local officials. “Reflecting on the years 2011 through 2013,” Stone notes, “a person might find it difficult to conclude that one company was the more ethical operator . . . Both CEOs seized the tremendous opportunities before them with steely determination, pausing just long enough to turn around the repair some of the carnage they left in their wake.” Stone adds, “in the end, there emerged an unavoidable fact: Chesky was every bit the warrior Travis Kalanick was. He believed so much in the promise of his company that he was going to fight for every inch of territory.” Both companies racked up so many victories against local officials because their services had come to be regarded as essential by so many residents—and the high-priced lobbyists they both hired managed to mobilize so much support that local officials were forced to back down.

After cataloguing a litany of offenses by both companies, Stone relents in the end. “Both Travis Kalanick and Brian Chesky had made big promises: to eliminate traffic, improve the livability of our cities, and give people more time and more authentic experiences. If these promises are kept, the results might well be worth the mishaps and mistakes that occurred during their journeys; perhaps they’ll even be worth the enormous price paid by the disrupted.” Not to mention that $100 billion the two companies’ founders and investors have amassed.

Brad Stone is a senior executive at Bloomberg News in San Francisco. The Upstarts is his third nonfiction book. The second was the bestseller The Everything Store about founder Jeff Bezos and the rise of Amazon.com.

Brad Stone has pulled off a rare feat: he’s written the definitive story of two very different companies, Uber and Airbnb, in one book. By interlacing, comparing, and contrasting the two giants of the sharing economy, our insight is heightened and the narrative never drags.

The book works on multiple levels: a detailed and fascinating behind the scenes revelations of how of the two biggest, most transformative companies started, grew, and operated; as a business book sure to be appreciated by entrepreneurs and managers of all stripes; as a partial champion and partially careful critique of the tech culture and nascent sharing economy; and as a ripping good yarn that anyone who likes a good story can appreciate.

What sets this book apart from others is that Stone is a real reporter, highly respected and renowned in the tech industry, with a long career of success, including his last best seller, The Everything Store about Jeff Bezos and amazon. Unlike some other books about these companies — including one solely on Airbnb that is about to be released and for which i read an excerpt in Fortune — Stone’s book isn’t pure hagiography or a trifling puff piece that feels like it was written by the P.R. departments of Uber or Airbnb. There is real, nuanced, and sometimes critical reporting being done here.

Perhaps, too, that leads to the one critique of this otherwise superb book: Stone is so careful and measured in his tone and approach — never allowing his opinions to overshadow the known facts — that sometimes I wished he was more daring in speculating about what it all means, and the possibly dystopian ways it could all shake out down the road. But of course, in this dark day and age, there’s something to be said for a media member who is careful in his approach, so it’s hard to ding him too hard for sticking to the known facts and allowing the reader to draw some of our own conclusions.

That said, if you are interested in these two companies, starting or growing a company of your own, the tech industry in specific or business in general, the ins and outs of the new sharing economy, or just some compelling human interest, this is surely the new must-read book on the subject.

The Upstarts is a great expose of the founders of Airbnb and Uber and has great analysis of the companies' brands and public perception. A good quick read like The Everything Store, but not as great a story to be told, yet. It is too soon to write about these companies. Brad Stone also reads slightly too generously about them, are they really changing the world? (they will, but not yet) and it feels more like how Kalanick and Chesky want to be portrayed than how reality is: they cannot be this naive about the consequences of their companies. A more critical review might have hit harder.

Ultimately, the book has left me more informed about the debate involving Uber and Airbnb, but no more enlightened as to how I feel about it.

The excerpt from Business Week was so gripping that I stopped halfway through and downloaded the kindle edition. It’s fast paced and mostly a good read. Where the book bogs down a bit is when, to fully explain the story, you need to introduce some minor players who had a short but important influence on the business. For this reason I have it 4 stars as its a great read and for sure more than a 3 star but as mentioned it does bog down in places.

Another great read from Brad Stone. Really enjoying The Upstarts just as much as The Everything Store. Brad Stone always provide a compelling narrative with great research. The in depth interviews provide real texture to the story line which always moves at pace. A must for all interested in Corporate Strategy and Digital Disruption JKA

Overall enjoyed this book very much! Brad Stone is an eloquent writer who draws out the stories of AirBnB and Uber in an engaging manner. Although what eventually happens to these start-ups is well-known, this book still sheds a lot of light on their backstories and challenges. You will be surprised with how compelling Brad Stone's narrative is!

Business writing at its finest - it quickly becomes a difficult book to put down. Yes, he recounting the stories of two industry-changing business but he never shies away from reflecting on the reasons for their success.

Well written and enjoyable storytelling. Did a good job weaving the stories of two seperate companies into a single narrative. Would have been good to get an expanded view of the initial trough of sorrow period though, rather than an even weighing to all periods of the company history. But that's just a personal preference as I found that chapter the most interesting by far. All in all a good read.

I stumbled on this book and didn’t regret, fascinating insights interesting the upstarts and how dis similar paths were so connected. Great overview of how these businesses became who they are today

If you want to know what it takes to become upstart, read this book. Very well written, interesting story. Recommend

This is a good read if you want the story of the rise of Uber and AirBnB. Interesting to see the characters behind the scenes. Highly recommended.

Loved ‘The Everything Store’ - love ‘The Upstarts’