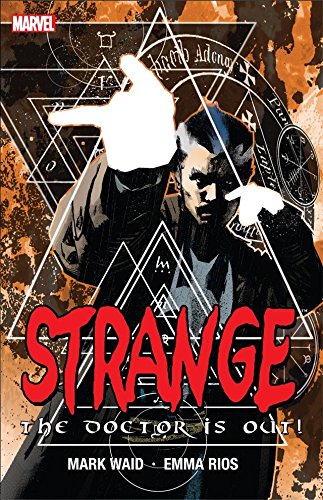 Strange: The Doctor Is Out

No longer Sorcerer Supreme of the Marvel Universe, Stephen Strange must discover a new path to fulfillment and enlightenment. Unfortunately, that path leads through a bizarre, terrifying gauntlet of magical menaces - and if the former Master of the Mystic Arts is going to survive the journey, he'll need some assistance - in the form of a brand-new student!
View on Amazon
Okay, when a Doctor Strange story opens with the good doctor himself at a baseball game and getting beaned in the mug with a baseball - thus spilling nachos and cheese all over his shirt - it really bodes well for the rest of the mini-series. And then, moments later, when Dr. Strange starts giving the ump the business ("Hey, ump! This your phone? 'Cause it has three missed calls!"), well, I just started big-grinning. You hardly ever see this side of the Sorcerer Supreme.

Except, of course, he's the Sorcerer Supreme... no more. For abuse of the dark arts, the title of "Master of the Mystic Arts" was stripped from Stephen Strange and bestowed on someone else (on Brother Voodoo, in the pages of the NEW AVENGERS). It's a peculiarity, seeing Dr. Strange not throwing down with the mystic mojo, not invoking the Hoary Hosts of Hoggoth or the Friggin' Flames of Faltine (he actually doesn't say the "Friggin'" part... but he should). This trade is pretty easy-breezy in tone, but veteran writer Mark Waid doesn't dismiss how bummed out Strange is about his loss of power and status. Stephen's goatee looks cowed.

STRANGE - THE DOCTOR IS OUT! may not be the most relevant Dr. Strange story ever, but it sure is fun and offers an interesting spin on the fallen mage. The trade collects issues #1-4 of this mini-series. It also comes with a four-paged Dr. Strange sketchbook by artist Emma Rios. His hands having once more betrayed him, Stephen Strange can now only work the most rudimentary of spells. Still trying to fight the good fight but now having to get his hands more dirty - he inadvertently takes on a new apprentice, the spoiled and pampered rich girl, Casey Kinmont. Actually when Casey begins exhibiting an aptitude for sorcery, Strange has no recourse but to take her under his wing.

In the course of four issues, they tangle with an assortment of demons, not all of whom happen to be fiendish and diabolical (the demon Larry, for example, is kinda cool). Mark Waid manages to work in a satire concerning children's beauty pageants, as well as a smidge of sorcerous apocalypse. Waid also introduces a strong relationship between Strange and Casey. She comes to view him as a mentor and even a surrogate father. And for Strange, Casey provides welcome distraction from his profound demotion, and it helps that Casey soon enough becomes a likable character. I didn't expect that emotional tug near the end there as the story unveils Casey's jeopardy and dilemma. In this mini-series, we mostly regard Strange thru Casey's eyes and this fresh perspective has the effect of humanizing the aloof enchanter. He just may have gotten too big for his britches, what with once having been hailed as the mightiest magician in the cosmos. Now he needs help just to properly position his fingers before a conjuring.

The visuals are arresting. Emma Rios's manga-influenced art gives us clean lines and composition that catches the eye. My one issue is her depiction of the demonic baseball game. It's very hard to follow the action. I had to work out that that was a dropped third strike which allowed Strange to run the bases (yes, Dr. Strange takes a turn at bat; I did say he's had to get his hands dirty).

This is a good storyline with a great mix of humor and action. However, it does not stand on its own well. Doctor Strange did something, which is never explained in this story, to have the title of Sorcerer Supreme taken away from him. The lack of explanation was annoying, but I could live with that - or I could just Google it. Some of the other things that don't get wrapped up well (which would be spoilers if I go into detail), bother me more. As far as I can tell, this is supposed to be a stand-alone story that mentions but does not depend on other storylines. That is not the case. As far as condition of the product and shipping, those get 5 stars. Excellent condition and packaged to stay that way. Also received in a timely manner.

Doctor Strange meets a teenage girl that gets a bit of his magic. She abuses that power and learn the problems it bring and see a whole different world. A new look on life the demons and the end of the story we see it in her point of view. Also to see how they make front of kid shows is funny.

As far as Doctor Strange goes, this was pretty good. The new assistant took some getting used to, because she seemed a little self-centered. I wanted to like her but it was difficult for the first issue or two.

A complex and entertaining tale!!!

Strange has some excellent art in a very modern style, "rebooting" Dr. Strange in an appealing and humorous way. Deals with several interesting psychological matters well. The characters are palatable and the story well told.

I bought this comic book for my husband at his request because he likes Dr. Strange. He loves and is very happy with it.

As a long time reader of Marvel Comics I have had huge respect for the majority of the incarnations that Dr Strange has gone through over the years, from Ditko onwards. The sorceror supreme has pretty much always been handled respectfully and in a mature manner. All that has changed with this outing. Now, I appreciate that Stephen no longer wears the sorceror supreme mantle, but this 4 issue series really does nothing to add to the mythology of the character. It seems that Mark Waid, for whom I have great admiration (see Empire as an example of what he can still achieve) has directed this towards the teen market. Both the writing style and the artwork are clearly targeting that market. No problems with that, as there are less readers of my vintage than there are teens, but for me it really did absolutely nothing. Sorry, but this is one for the library!