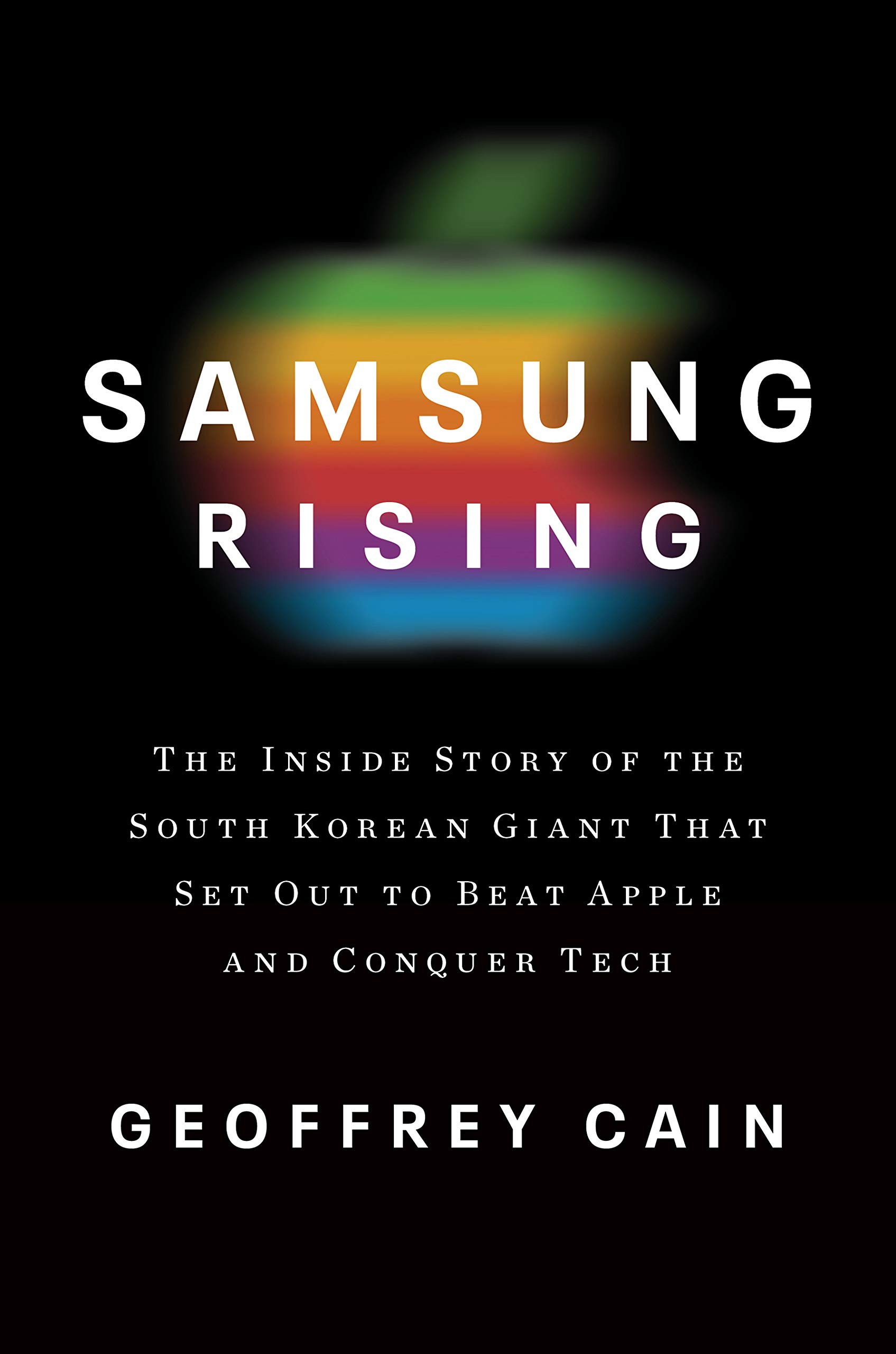 Samsung Rising: The Inside Story of the South Korean Giant That Set Out to Beat Apple and Conquer Tech

An explosive exposé of Samsung that “reads like a dynastic thriller, rolling through three generations of family intrigue, embezzlement, bribery, corruption, prostitution, and other bad behavior” (The Wall Street Journal).

Based on years of reporting on Samsung for The Economist, The Wall Street Journal, and Time, from his base in South Korea, and his countless sources inside and outside the company, Geoffrey Cain offers a penetrating look behind the curtains of the biggest company nobody in America knows. Seen for decades in tech circles as a fast follower rather than an innovation leader, Samsung today has grown to become a market leader in the United States and around the globe. They have captured one quarter of the smartphone market and have been pushing the envelope on every front.

Forty years ago, Samsung was a rickety Korean agricultural conglomerate that produced sugar, paper, and fertilizer, located in a backward country with a third-world economy. With the rise of the PC revolution, though, Chairman Lee Byung-chul began a bold experiment: to make Samsung a major supplier of computer chips. The multimillion- dollar plan was incredibly risky. But Lee, wowed by a young Steve Jobs, who sat down with the chairman to offer his advice, became obsessed with creating a tech empire. And in Samsung Rising, we follow Samsung behind the scenes as the company fights its way to the top of tech. It is one of Apple’s chief suppliers of technology critical to the iPhone, and its own Galaxy phone outsells the iPhone.

Today, Samsung employs over 300,000 people (compared to Apple’s 80,000 and Google’s 48,000). The company’s revenues have grown more than forty times from that of 1987 and make up more than 20 percent of South Korea’s exports. Yet their disastrous recall of the Galaxy Note 7, with numerous reports of phones spontaneously bursting into flames, reveals the dangers of the company’s headlong attempt to overtake Apple at any cost.

A sweeping insider account, Samsung Rising shows how a determined and fearless Asian competitor has become a force to be reckoned with.
View on Amazon
This is a great read. It opens with the famous case in 2016 of Galaxy phones that kept catching fire while Samsung tried to suppress the truth. From this launching pad the author exposes many issues with the militaristic culture of Samsung. He also weaves in the "Republic of Samsung" theme to expose the corrupt nature of the relationship of government and big business in South Korea. All of it rings true. In no case did I feel the author overplayed any of the issues. In fact in his nice review of Samsung's history, he left drastically underplayed one ugly part. It is well known in the industry that Samsung's early rise was aided and abetted by a massive industrial espionage operation conducted with the cooperation of the Korean government. Besides Samsung, the story is useful and relevant in another way. Look behind Huawei, DJI and other Chinese giants and you will find similar stories.

Hopefully this story will cause some introspection on the part of Samsung as well as the many in Korea who have looked the other way for decades. I have my doubts. It is still the case that the proudest Korean parents are those whose children get jobs at Samsung. As long as Samsung continues to succeed I suspect this will continue.

That brings me to the missing part of the book. For all of its many faults, Samsung has been a huge success. Their market cap has doubled since the case of the burning phones. Clearly some things have worked very well for Samsung. The fact that this success has occurred over a period of decades rules out an explanation of short term tricks. I wish the author had explored this half of the story with equal diligence. If Samsung is to evolve it can't just be by fixing a broken culture, it has to be by building on what has worked.

Very thorough and well researched read on a company not much has been written about.Not being Korean, it was interesting to learn about the relationship between the company and the country, going back generations. Great descriptions of how the company transitioned from a middling hardware company into an almost iPhone Miller over the generations. Really good back stories on what was happening g behind the scenes to develop the awarding g Galaxy smartphone and the memory chips.that supportedi it. Kudos to the author for such a well researched story of Samsung!

Filled with fascinating interviews about the inner workings of Samsung.

Reading about Samsung's Republic inner workings, history of corruption, and fraud was interesting and eye-opening for me.
Author did a great job on collecting all these interviews and producing a story that is just fun to read.

Samsung has survived and produces great product, yet its history was full of fraud and makes one question how other companies are run!!

In a very detailed account (close to 400 pages), Cain provides an excellent view into the inner workings of Samsung - a company that perennially seems to be mentioned only if the lead story is Apple. With his unique access to former and current executives and employees of Samsung and its partners and his own reporting over the years, Cain not only provides a breezy, detailed, and informative look at the corporate dramas internal to Samsung.

While the Lee clan is center to the narrative, Cain is able to also provide an informative read of the region's history, rivalries, and political tribulations. Perhaps no other region has the fate of a company is inextricably tied to the wellbeing, pride, and ambition of an entire country.

One also gets to get glimpses of various management philosophies, flavor-of-the-month marketing tactics, cultural barriers of building a global brand, and how personal ambition conflated with national identity drove strategies across various companies, particularly at Samsung.

While the author succeeds in providing a detailed look at the key personalities, their motivations, and a somewhat time-linear narrative of key events, he does not make any attempt to contextualize those with a richer description of the technological breathroughs or other socio-economic factors that were driving business trends at the same time. Moreover, there is very little analysis per-se; no second-guessing of key decisions or assessment of leaderships - the author lets his interviewees provide that and he does a fantastic job of abstracting and synthesizing those. In the end, Cain achieves what Samsung probably wants more than anything - see it as a global company in its own right and not just as an Apple competitor. An excellent read for anyone interested in management, technology and/or leadership.

Geoff is one of my oldest friends and mentors. I read the book proposal 4 (or mayb 5?) years ago and my first reaction was: “I want to read this book. Now.” Even though I grew up in Vietnam and not South Korea, Samsung was visible in many aspects of my adolescence, yet I somehow knew very little about the company’s history and culture.

I can’t think of a better person to write this book than Geoff. For almost a decade, I saw how hard Geoff worked. He uncovered many of Samsung’s secrets, wove them into a suspenseful story, and distilled the story into business lessons.

There are many subtle and not-so-subtle differences in the way Asian people do business that not many westerners appreciate. I’m tired of having to explain to people our complex relationship with nepotism, bribery, authority. Geoff not only understands them -- he was able to contextualize them with insightful and often humorous observations. There are moments, including dad puns like “Seoul searching”, that make me chuckle.

My only complaint is that I wish I had seen more of Geoff in the book. He’s so much fun to be around, but the book seems a bit formal, but maybe all business books are supposed to be formal.

I’d recommend the book if you’re interested in learning more about one of the largest corporations in the world that nobody talks about, Asian business culture, technology, or if you’re just bored quarantining at home looking for a good read.