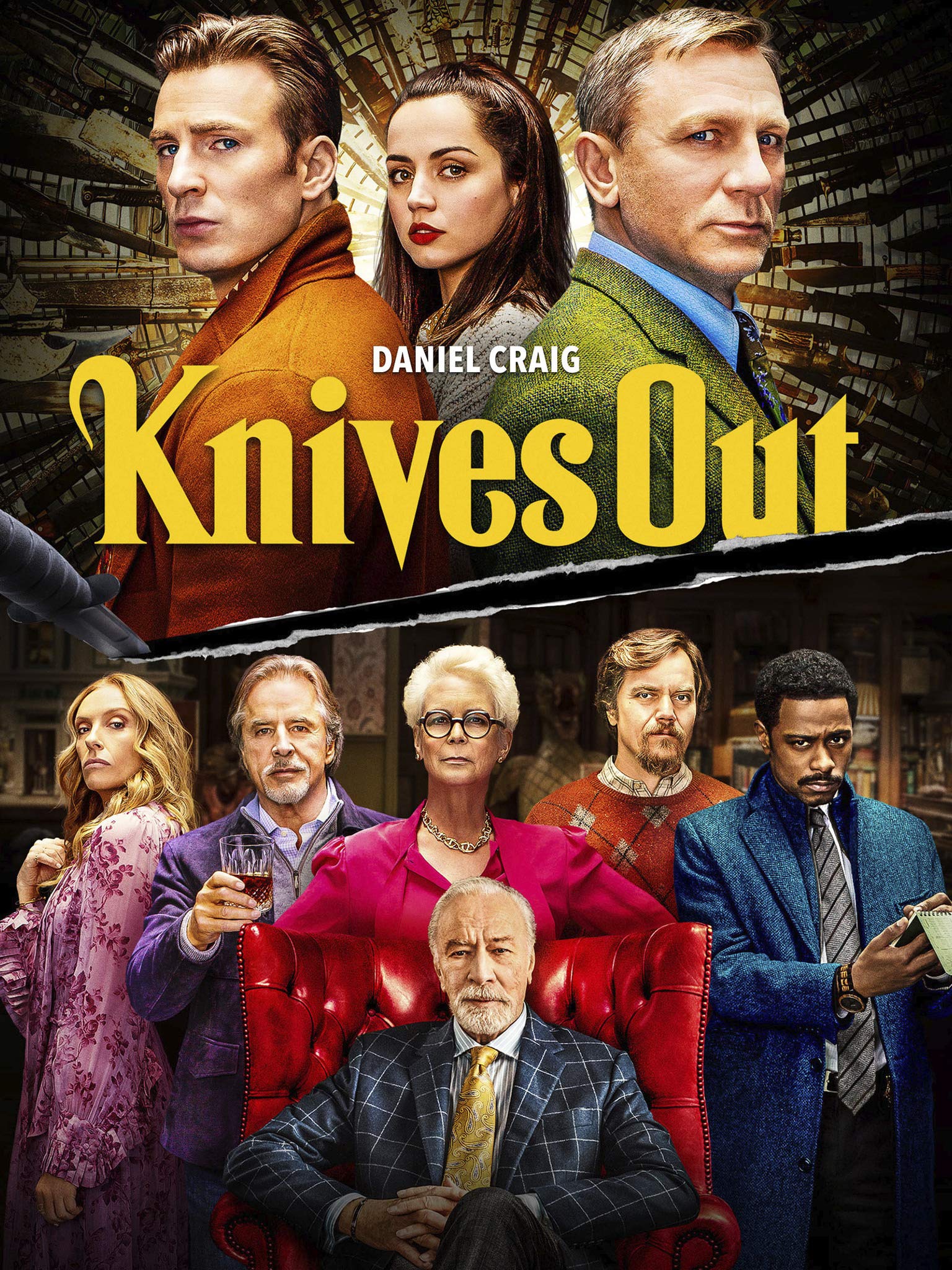 View on Amazon
Back in the days of black-and-white, mystery films were quite common but as the years went by, they became less and less common with the mystery genre becoming the domain of television. This is a pity, because I like an old-fashioned mystery. Between this movie and Murder on the Orient Express, it's nice to see the genre make a comeback. Director/writer Rian Johnson was definitely trying to evoke an old school mystery film with this homage, and after seeing the trailers, I definitely wanted to see this. I even went to a farther away early access screening because I couldn't wait. I'm pleased to say this definitely met my expectations.

Knives Out is just a really well told movie. For 2 hr., 10 min., this is finely paced and edited. Johnson really knows how to steer the story, especially the beginning and introduction to the facts of the case.

Besides being a mystery, this movie is also a critique of privilege, which I felt Johnson managed to not beat the audience over the head with. The movie also has a good sense of humor.

The suspects consist of the Thrombey family, who from one extent to another all have leeched off of the money and success of patriarch and mystery writer Harlan Thrombey (Christopher Plummer). They are such a delightfully self-entitled but diverse group of larger-than-life dysfunctional people. I'm a little disappointed that we didn't get more of them. (Ana de Armas' Marta Cabrera, Harlan's personal nurse, is the actual star of the film.) I especially thought that Linda Drysdale (Jamie Lee Curtis) is given short shrift.

The cast is excellent all the way through, and I just don't have time to mention everyone. The best performance is by Daniel Craig as Southern gentlemen detective Benoit Blanc. He just kills it as the eccentric and well-spoken detective. I also appreciate that Benoit isn't portrayed as a socially awkward, mircaulous wunderkind as is often the case with detectives these days. Benoit is definitely the smartest guy in the room, but solving the case is real work for him. Again, this is Ana's story. The trailers make Benoit look like the lead. Just don't want you to have false expectations. He is one of the biggest players, make no mistakes.

The movie looks great. The Thrombey estate is delightfully grand and old-fashioned looking and is decorated with a wide assortment of mystery-themed or antiquated bric-a-brac. The outfits all look great as well.

There is only one thing about this movie that bothered me. The score tries for a classic mystery feel to it but tries too hard. A couple times it felt like they were just blasting the music in my face.

Overall, this is just a very entertaining movie and definitely something for mystery fans.

More "woke" politics not so subtly inserted into the storyline. The movie bleeds out under the weight of it's political agenda and becomes boring crap.

Ruined by political propaganda. Boring biased story line. Took what could have been a great movie and try to push an agenda. I wanted to be entertained not have political views crammed down my throat. I could have just watched the news... . What a waste of time!

So many movies today are a disgusting, overt insults to American Citizens. Everyone in Hollywood hates us and they make these movies to tell us so. We this movie sure made me return the feeling, with a little extra contempt for Bezos and the people at Amazon that deliver this vile material.

The first 30 minutes of this movie were really, really good. The cinematography is gorgeous, the dialogue snappy, the editing engaging. But it all fell apart once the first twist is revealed and Rian Johnson starts getting self indulgent.

I really don't like that he likes to have meta lines about how stupid his writing decisions are as if that justifies them. For example, we get the most boring car chase in cinema and when it's over one character says "that has to be the dumbest car chase I've ever seen". The detective sounds like a Foghorn Leghorn parody and they point it out at the end of the movie as if that makes it any less ridiculous! The writing gets flat out stupid at times. There's a scene where the detective claims that the case is like a doughnut with a hole that needs to be filled by a doughnut hole. Our lead character can't lie or else she vomits uncontrollably.

A bad movie from a horrible writer.

Theater review. Spoilers lurk. Some of my favorite movies are those involving great mysteries. Something from Agatha Christie like “Murder on the Orient Express” or “Death on the Nile” or Sherlock Holmes (not the ones with Robert Downey, Jr) or even TV’s “Columbo.” Here’s the latest example and it’s a good one.

The evening of the birthday, Harlan is found dead, apparently of suicide by slitting his own throat. As the film opens, a detective, Lt Elliott (LaKeith Stanfield), a State Trooper Wagner (Noah Segan) and a mysterious private detective named Benoit Blanc (Daniel Craig) are questioning the family and staff one by one.

Elliott is about to close the case but Blanc asks to keep things open for a while. Craig, goes from his native British accent to a syrupy southern drawl that seems perfect for the character, the American version of Hercule Poirot. When a few days later attorney Alan Stevens (Frank Oz) comes to read the will. The first one who shows up Ransom. As someone says, typical Ransom, missing from the birthday, first in line for the will reading.

As a surprise to everyone, Harlan’s fortune including the huge Victorian mansion and grounds, the book publishing corporation, book residuals amount to millions of dollars don’t go to those who expected them, but the person closest to him…Marta! In fact Ms. De Armas is the surprising lead actor in this thriller. She’s quite good in what has to be her biggest role.

The cornpone PI eventually manages to put it all together with help from Harlan’s way-old mother (K Callan). The film is full of surprises and wonderful humor. In one scene when Blanc first meets Ransom, Ransom asks, “What is this, CSI: KFC?” Family fun. Recommended.

I do love the picture!!! I do recommend. 4k is the best