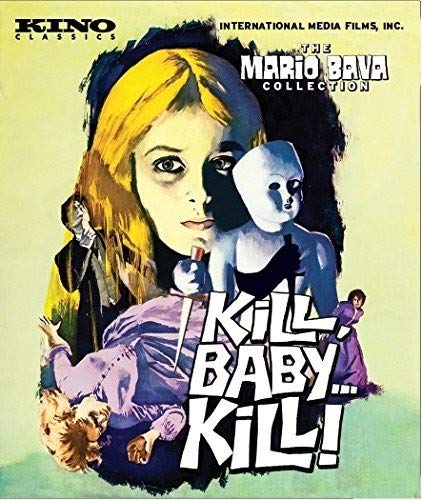 Posted by vhozq84k | Published 6 months ago

Your recently viewed items and featured recommendations
›
View or edit your browsing history
After viewing product detail pages, look here to find an easy way to navigate back to pages you are interested in.
View on Amazon
I am an admitted Bava fan. I watch and collect all and any film he has made. This is a personal favorite of mine. It is not the best of Bava but it is not anywhere near as bad as the negative reviews here.
Bava was a genius with a camera and this film shows how he could make a beautiful atmospheric film with no budget and limited time, he could and did make movies that most film artists could not make in the same situation.
This is one beautifully filmed ghost tale. The story is about a village being terrorized by the vengeful spirit of a child. The story is simple but in no way interfers with the set up or execusion of this wonderful film. I recommend it to anyone interested in film making and to everyone who likes a simply beautiful ghost tale.
The transfer is nice and the commentary is informative and entertaining. Good quality!

Although this 2K restoration of “Kill Baby Kill” is a bit grainy at times, it is the best available version of the film. In addition, while Kino Lorber’s entries in “The Mario Bava Collection” are pretty lacking in special features, this one boasts more than most.

Because the presentation and extras are respectable and because this an essential & influential Bava film, I’m awarding it 5 stars...until a more definitive edition comes along.

Note: the best Mario Bava Blu-ray in terms of overall value (taking into account film quality, image and special features) is the Arrow version of “Blood and Black Lace”. Start there and then get this one, “Black Sabbath”, “Black Sunday” and “Bay of Blood”. They’re all pretty affordable.

Kino Lorber has released Director Mario Bava's Gothic Horror Masterpiece "KILL,BABY,KILL' aka 'OPERATION FEAR' aka 'OPERAZIONE PAURA'- 1966 in Blu-Ray just in time for the Halloween Season. It has appeared in many formats until Anchor Bay included it in their MARIO BAVA BOX collection in DVD about 8 years ago. Now we are able to appreciate the beauty of the films color and atmospheric locations and sets plus the Italian language version for the first time in the states. The film is also presented in with it's original title sequence as the titles we have always seen are included as an extra . Arrow Video has released simultaneously a Blu-Ray release as well but I'm not sure how that one looks. Suffice it to say this release by Kino Lorber will be hard to top for the transfer is flawless in a 1.85 widescreen edition in both English and Italian dialogues. Extras include a 30 minute documentary with Bava's son Lamberto returning to the village location that was filmed over 40 years ago and looks exactly the same , a wonderfful interview with actress Erica Blanc who still looks great and has great memories of the shoot. American TV spots and an International trailer. The true highlight is the audio commentary by author Tim Lucas who sheds incredible insight and anecdotes over the films running time and makes us yearn for another issue of VIDEO WATCHDOG. . KIno Lorber deserves kudos for finally giving Horror fans the definitive release of one of the greatest Supernatural nightmares ever filmed . I remember seeing this film for the first time on a small black & white TV back in the early seventies which blew me away then but never realizing I would experience it 46 years later in this breathtaking transfer. The tragic story of Melissa Graps is preserved forever for future generations and I think that Maestro Mario Bava would have approved .

Okay, it's a stupid title for a movie, and it sounds like it belongs to a cheap slasher flick.

But fortunately Mario Bava's "Kill Baby Kill" is much better than its hokey title suggests, as one would expect from a giallo master. Instead of a slasher movie, it's a gothic horror movie with impalements, ghosts and magic. It has all the beauty -- and terror -- of a decayed fairy tale.

When a young woman leaps onto an iron fence, young Dr. Eswai (Giacomo Rossi-Stuart) is called in to do an autopsy, with the help of beautiful Monica (Erica Blanc). He finds a coin in the girl's heart, and none of the townspeople will tell him -- because if they do, they will suffer a similar fate. Eswai doesn't buy all this superstition.

He's even more annoyed when local sorceress Ruth (Fabienne Dali) begins using her powers to protect a young girl from a childlike specter -- little dead aristocrat Melissa Graps. But as the bodies pile up, and Monica is plagued by bizarre nightmares, Eswai must accept Ruth's help to save Monica from the ghost, and an evil baroness.

This is more gothic horror rather than straightforward "giallo," but it has the cinematic touches that Bava was known for. Bava fills the run-down village sets with broken doors, coffins, and long fluttering canopies. It's gothically delicious. But he also adds dreamlike touches -- the village is full of mist, tombstones, and green, blue and red lighting. He packs this movie so full of visual opulance, it's like being locked inside a beautiful nightmare.

And he has a knack for the really spooky stuff too. A bouncing ball, childish giggling, and a little girl on a swing become really horrifying, not to mention all those impalements on everything from fences to, uh, candlesticks. Two particularly eerie scenes have Eswai chasing himself through endless rooms, and Monica running down an endless spiral stair.

The ghost story itself is quite simple, and the secret identities of two characters are quite obvious. But fortunately, this doesn't detract from the atmosphere. How could it? "Kill Baby Kill" is steeped in atmosphere from the first creepy scene, and rather than building in suspense, it runs steadily all the way to the end.

And the cast helps. Despite the emotionless dubbing, Rossi-Stuart and Blanc both do outstanding jobs, but the best performance of the movie belongs to Fabienne Dali, as a tragic sorceress who is trying to save the village from Melissa's revenge. The scene where she mourns her dead lover is exquisite.

Together with "Black Sunday" and "Black Sabbath" this film belongs to the best of all the MARIO BAVA movies ! Not to be missed , and worth to watch it for a second and third time . Very good picture quality too , as usual with the ARROW editions .

Great movie...my favorite Mario Bava not that anyone cares. Great Blu-ray too...Audio and Video was nice upgrade from my Anchor Bay DVD.

Good atmosphere ,great colours, week plot and story.The image of the child though , is very influetial.