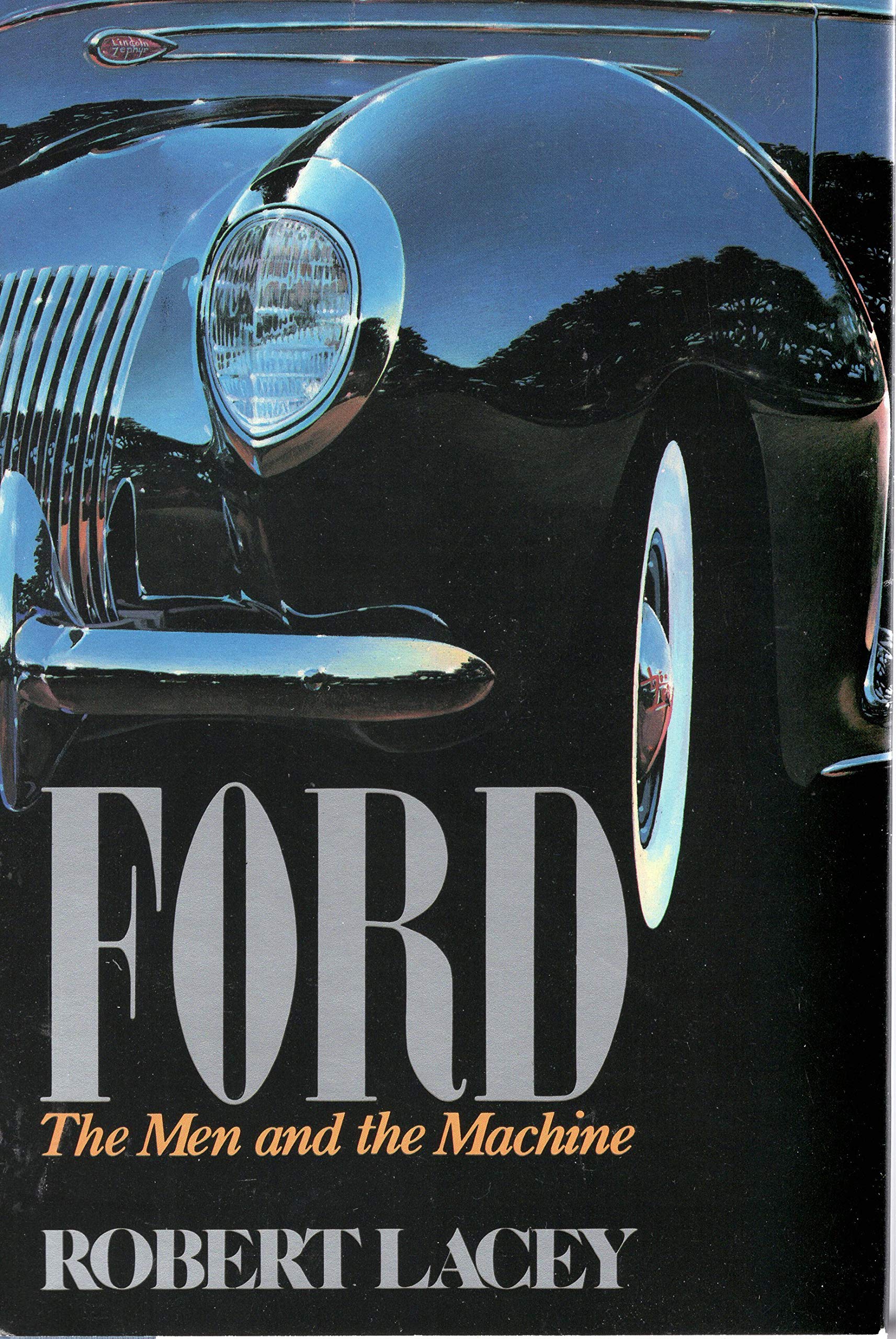 FORD The Men and the Machine

Spanning more than one hundred years and four generations, this biography of Henry Ford, the automobile company he created, and the dynasty he founded, reflects the rise of industrial America and the American dream
View on Amazon
I don't believe I ever read a 700 page biography cover to cover before (or any other book that size). I'm not an avid or a fast reader but this book held my interest. Certainly this book is not for everyone, but if you're interested in automobiles and how automobiles and the people who built them changed the world (for better or worse) this is one book You'll want to read. This book was published in mid 80s and I was in Detroit around that time, I wish I could have read it then. Charlie Sorenson wrote an an autobiography, " My Forty Years With Ford" good, but an autobiography has one point of view, where this book has several. It goes way beyond Fords, but then Fords (the people and the cars) have touched most everyone on the planet. I don't know if you can still get a decent hardcover, but my paperback wanted to come apart. I may have to buy a hardcover because I'll probably read it again!

"Ford: The Men and the Machine" is the most definitive and complete book about the life and happenings of automotive's greatest man, Henry Ford. His accomplishments as cited cannot compare to any other single figure in automobile history (or even business itself).
The book is nothing short of epic: over 800 pages and 36 chapters, plus appendices. It starts off with the author's assessment of Ford's total contribution to life, starting at Dearborn Michigan in 1831. The details are all-inclusive and mind boggling, right down to Henry's Sister's comments about his early days repairing watches. The book moves slowly and steadily through Part One, "The Rise of Henry Ford" to Parts Two and Three, "Glory Days" and "Grass-Roots Hero." Here the reader is given the unbiased account of even the thoughts of young Henry, and how he became so fascinated with what was then the latest thing: the gasoline engine, which he saw in 1877 from a trip to Machinery Hall in Philadelphia. We are given the full story behind Ford's rise to power over other prominent automotive men of his time, such as the Duryea and the Dodge Bros., and particularly Henry Selden. I found it exciting to read about how Ford didn't give in to a greedy, money-hungry individual like Selden who had no real engineering talent, but wanted only to rake in the royalties from his so-called gasoline engine that he patented in 1895 (it didn't even work as illustrated in his diagram, and Selden didn't even have a working model in an automobile until 1904--it went five yards and died!). Ford held out through more than 10 years of court battles over the legal implications of the Selden patent, and won. After that, there was no doubt that Ford had firmly established himself as a "man for the people." The victory over the Selden patent allowed ALL automobile manufacturers to keep their prices affordable.
Part Four, "Henry and Edsel" describes the business relationship with his firstborn son, and their occasional public disputes over company policies and overall business strategies. Henry bitterly opposed automoible financing, for example, but Edsel was all for it. Edsel was right, too, it was the only way to sell cars to lower-income buyers. Of course, the whole story behind the biggest flop in automotive history, the Edsel car itself, is revealed. What happened? How much money was lost? What were the shortcomings of the Edsel that ultimately was its demise? "...The Men and the Machine" will tell you, without room for doubts.
In fact, as part of the research I'm doing for an automotive book of my own, I noticed at least three other authors in my bibliography that referenced this same book, perhaps Lacey's greatest achievement.
Parts 5 and 6, "Henry II" and "Henry and Lee" gradually move more away from the business side of the Ford Machine--but not altogether away--and gradually reveal personal aspects of later Ford generations and their family relationships. Discussed are the development and marketing plans of the Mustang and Pinto which, ironically, were diametrically opposed to each other as complete success and utter failure.
This book is worth double the money. Sometimes I am amazed at the length Lacey went to get his sources, over 50 pages of specific and varied references. I feel fortunate to have a copy that is in good shape. Every time I open the pages, I learn something new. Each page informs, educates and increases depth of thinking, in that sometimes what appears to be a single invention is only a hub to other spokes of development. "...the men and the Machine" actually helps me to think better overall. I can then apply the underlying techniques to all situations in life; consider that one thing leads to another, and if this happens, then it will affect that and that, and so on. If you have even the slightest interest in automotive development, automobile history, American Culture or the person of Henry Ford himself, do not be without this book. Buy it today. My highest recommendation for all readers over 14 (reading level).

The book is primarily a biography of Henry Ford, to a lesser extent, his son Edsel, and grandson Henry Ford II. It also covers much of the history of the Ford Motor Company up to the early 80's. The company history is only partial and deals primarily with the actions of the three Fords in running the company, although considerable space is spent discussing the contributions of some other key executives. Critical developments such as the Model T, the V8 engine, the 49 Ford and the Mustang are covered but there is no coverage of routine product or Company development.

It makes very interesting reading, but one comes away wondering how the company kept going given all the foibles and quirks of Henry Ford and all the marital dramas involving Henry II. The author spent two years living in Detroit researching this book and it shows in the vast amount of information presented. However, the style is very readable so you are not bogged down in the details. The book has an Epilogue that ends in 1985 and one wishes the epilogue might be updated to bring it closer to the present, as we now know there has been further ups and downs for Ford.

If you are interested in the history of a great American Company and its founder, this is a great book to read.

This is a fascinating book that describes the two major leaders of the Ford Motor Company: Henry Ford and his grandson, Henry Ford II. I had read a few biographies of Henry Ford I but this one moved into new territory, regarding the fates and successes of his offspring. A great read.

Henry Ford was an interesting man. He abused his son Edsel in so many ways. Well written book!!

Excellent book - I'm on my second paperback copy (and it's falling apart). Even if you're not an automotive industry aficionado, it provides an intimate yet not tabloid-creepy portrait of the Ford family, from the birth of Henry I through the retirement of Henry II. Highly entertaining, informative and very readable.

Love this book, very informative, lots of information I never knew and written in a very pleasant way.

An outstanding book, the absorbing story of a family interwoven with that of the motor car. Every chapter has amazing material in it. My first visit to USA coincided with the launch of a new middle of the range model, known as the 'E' project', in 1956-7. It was an era of 'over-the-top' car marketing, when Chrylser boasted of its latest model as being 'not mere transportation, but a showboat named desire'. Not be outdone, Ford provoked huge excitement in the build-up to its new launch, inviting the public to submit possible names; 18,000 were proposed. The fashionable poet, Marianne Moore, was enlisted and suggested Resilient Bullet, Mongoose Civique and other names. When the name 'Edsel' (the prematurely deceased son of the monarchical founder, Henry Ford 1) was chosen, it provoked universal derision, as did the vehicle itself when it was finally unveiled. Within three years, the failed Edsel was thrown on the scrapheap, while the new monarch, Henry Ford 2, ditched his first wife and his CEO and lost his replacement CEO, Robert McNamara, to President Kennedy's cabinet. This mixture of ruthlessness and decisiveness (coupled with far more competence than incompetence) was what enabled Henry Ford 1 to build a unique industrial enterprise, which survives (despite brushes with bankruptcy) to this day. There is still family involvement, but it is now more corporation than monarchy. The incredible conduct, personal and industrial, of Henry Ford 1 and Henry Ford 2 is graphically, yet not unfairly, described. It is not matched in recent generations, though there are fascinating vignettes of the founder's descendants. One of them, Alfred Brush Ford, joined the Hare Krishna movement, where a fellow devotee was Lisa Reuther, she being the daughter of Walter Reuther, the labor leader beaten up in 1937 by the ruffians of Alfred's great grandfather, Henry Ford 1, who had a deep aversion to trade unionism.

Just fascinating history, if that's your interest. Very detailed, accurate. What a gift for making history interesting. The first time I read it when I was young I finished it in a couple of days, as it is a real page turner. And little bits of history that are jaw dropping. Sexually assaulting servants as a hobby. Constant bad a mouthing Jews and Catholics, thinking he would stop WWI. Invading Edsels life with secret police. And brilliance in so many ways as well, as a gift for this and that and that......

Complete and well documented detailing the life of Henry I, Edsel and Henry II as well as other players in the history. Good photographs as well.