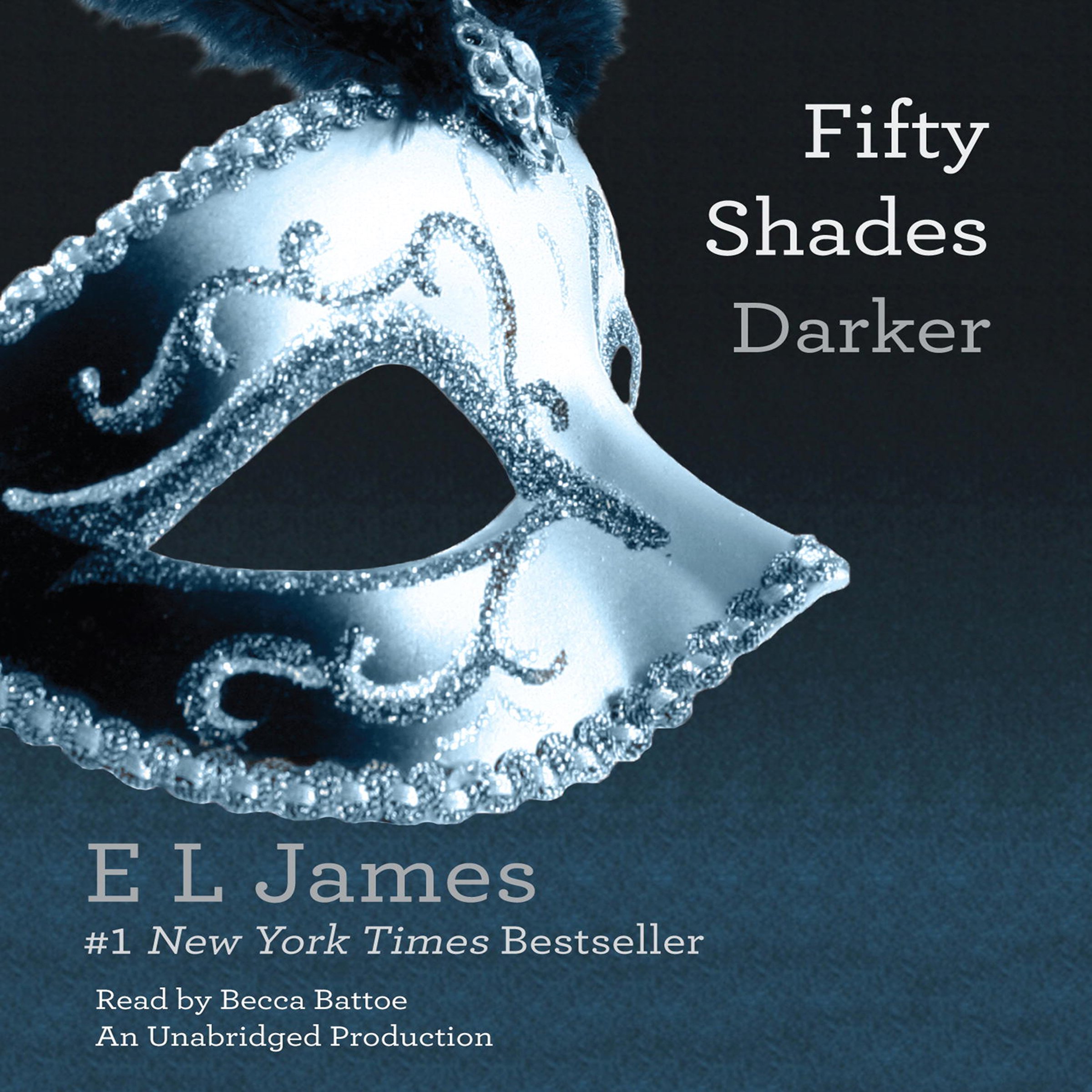 Daunted by the singular tastes and dark secrets of the beautiful, tormented young entrepreneur Christian Grey, Anastasia Steele has broken off their relationship to start a new career with a Seattle publishing house. But desire for Christian still dominates her every waking thought, and when he proposes a new arrangement, Anastasia cannot resist.

They rekindle their searing sensual affair, and Anastasia learns more about the harrowing past of her damaged, driven, and demanding Fifty Shades.

While Christian wrestles with his inner demons, Anastasia must confront the anger and envy of the women who came before her, and make the most important decision of her life.

This audiobook is intended for mature audiences.

View on Amazon
I read this 2nd book in the series and watched the movie as well. Truth be told, I thought the movie was done well. The pacing was good, but the thing that struck me the most was that Anastasia had grown stronger dealing with Christian, which was a good thing. She starts out as this young virgin I had a tough time buying but her growth as a human being was great in the second book. I love erotica and while this isn't quite what I generally read, I have to admit I was surprised by how much I enjoyed the book and the movie.

I am a recent 50 Shades fan. After watching the movie, without reading the first book, I felt that i was left with a cliff-hanger. Being that I couldn't leave it at that, I bought the second (and third) book to this series. I was weary at first, but quickly realized that it is not as many people describe.
50 Shades Darker, in my opinion, is very well written, despite a few strange terms, some repetition of words, and a minor typos I found throughout the book.
The plot develops quickly, but in a good way. The story strays from the BDSM spectra, and Christian and Ana's relationship flourishes. It brings up Christian's dark past with his childhood, his mother, his exes to where you begin to fully understand the character of Christian. It was enjoyable to see the soft side of "Fifty".
as most people claim, this series is very sexual. And, to an extent, I agree. In this second book, I found that their romance develops, feelings get strong, and that there is less kink to the sex scenes, and more romance and passion between the characters.
I found that each chapter left off at a suspenseful spot and I couldn't put it down! I read it through in less than three days.
I am a true romantic, from reading Nicholas Sparks, to a variety of other novels, I found this second book of the 50 Shades trilogy to be captivating, romantic, surprising, and dark all at the same time. Especially the ending (to which I will not spoil). It's definitely a read that I would recommend.

That cliffhanger was crazy, and I am so glad I did not have to wait to read book two. As heartbroken I was when Ana walked out, I was happy to see her finally take some control of the situation. I just wish she did not give in to him so easily when he begged her to try again but I probably would have done the same thing.

I like that we got to learn more about Christian’s past because it really helped the reader understand why he needs to have total control in everything in his life. I normally am not a fan of insta-love, but their story worked for me. They both experienced a relationship they have never had before, and it really connected them on another level. Christian’s alpha personality was obnoxious when it came to her new job but in the end I guess it was good that he was in charge or else who knows what would have happened with Hyde.

The thing I liked the most about this book was the storyline. We moved beyond Ana and Christian in the bedroom and really followed their life and the change of this storyline to them in a relationship. Do not get me wrong the sex scenes were still hot but I like when books have more to it then that. Another great book in this trilogy and another ending that makes me glad I can go right into book 3!

I continue to enjoy this series. I loved the first book for all the funny banter between Ana and Christian, and the draw of the second book is learning more about Christian's background. I have a thing for wounded heroes, and he's one of the best. Fifty Shades Darker is also interesting due to the deeper exploration of their relationship, with its peaks and valleys, negotiation, and character development.

One thing I love about this romance is how much both characters influence each other in a positive direction. Ana stands strong many times, and she's appropriately appalled when Christian buys the publishing company where she works. (I know others think this is stalkerish but for some reason this made me laugh. Boys and their toys!) We do learn Christian has some legitimate concerns about her boss.

Here Ana won't back down when Christian doesn't want her to go to work due to one of his crazy ex-subs threatening their safety:

His mouth presses into a grim line, as I place my hands on my hips. I am not budging on this. Who does he think he is?
"I don't want you going to work."
"It's not up to you, Christian. This is not your decision to make."

I was pleased when they find a compromise. That's what couples need to do when there's disagreement.

And when Christian fights his fear to let Ana touch him? Those scenes made me well up in tears. Ana is the perfect person to help Christian overcome his Post Traumatic Stress Disorder. Much better than the quack Dr. Flynn, who doesn't even name the correct diagnosis for Christian:

"Of course, there are obstacles--Christian's haphephobia, for one."
His what? I gasp.
"I'm sorry. I mean his fear of being touched...He has a morbid self-abhorrence. I'm sure that comes as no surprise to you. And of course there's the parasomnia...um -- night terrors, sorry, to the layperson."

It's no wonder Dr. Flynn admits "Ana, in the very limited time that you've known him, you've made more progress with my patient than I have in the last two years."

Doy! It would help to start with a proper diagnosis, Dr. Flynn!

The ending is a great way to keep the reader interested. But the "inner goddess" stuff was starting to get on my nerves so I think I'll take a little break before book three--there are a lot of awesome novels by fellow authors I can't wait to get to first.

Well' well' well'. Now we have got more insight into some of the things that causes the infamous Christain Grey to to be so dark and the things Anastasia is willing to do to bring more light into his world. As with the first book, the story continues to intrigue me. It is interesting to see the depth of feelings they have for each other and how they navigate through all their fears, doubts, jelousy, instance desires and constant injection of that terrible woman Elena who wants to keep Christian in the dark.
It is not easy for Christian trust but he knows Anna is good for him and he is willing to do whatever it takes to hold on to her, he sees her as a light in is darkness and he wants the change. I am looking at all the positives in this story. The hope, love, sacrifices and forgiveness that is shared between two people that is experiencing everything new together. Sometimes no matter how dark our struggles are, all we need is unconditional love to help ride out the storms and encourage us to be our best self. I think the story shows, that with positive influences, a person can choose to unlearn negative things and change their behaviour.

I purchased this title as a gift for my girlfriend after previously having purchased her the first book in this series.

Having not read this title myself I am unable to comment on its content but my girlfriend thoroughly enjoyed it and she is not often a fan of reading.

Arrived promptly at a great price.

Could not be happier with this purchase.

One of my favourite reads from 2012. I read the first book of this trilogy before it was picked up by one of the big 6 and before all the hype. I read it under four hours. It seems that people either love or hate it but I for one really enjoyed it from the word go. The second and third book did not disappoint either from my point of view. I read the rest of trilogy in quick succession. I have really got fed up with people going on about how messed up the story is and why would you want anyone like Christian Grey in your life. To them I say get a life - it is a make believe story and I am sure Mrs James did not write it with the intention of being some self-help book on how to live your life! As much as I enjoyed it, I know it is just a book, but what a book. For me this is much more than a story of a lot of sex. It is about self-discovery, relationships and acceptance that you cannot change your past but you can change your future for the better. Also I never thought of vampires once throughout

Well they didn’t stay apart for long did they? This angered me a little as I thought I should stick up for herself properly but then again I was quite upset when she walked out on Christian in the first book so was glad they got back together. Christian actually listened to Ana in this book, sometimes he was not happy with her decisions but he was better with her, less controlling. He just didn’t want anything to happen to her, he couldn’t face losing her.

Mrs Robinson aka Elena played a big part in this book, there was jealous from Ana but also Elena was jealous that Ana has stolen Christian’s heart.

This book was all about learning to trust and listening to each other.

Obviously this book contained a lot of steamy scenes but it also took on so much more, crime, suspense, and romance. It all worked really well.