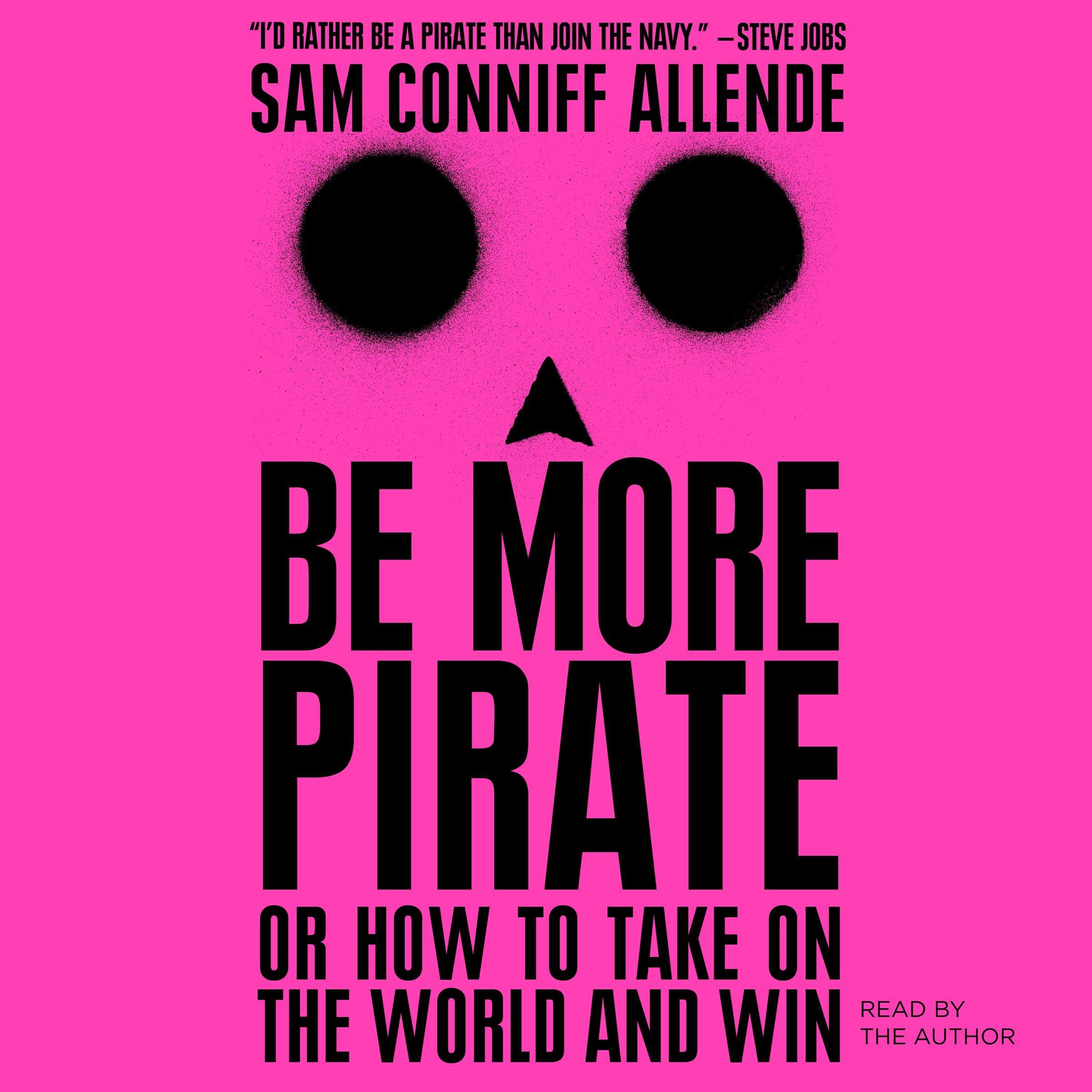 Be More Pirate: Or How to Take on the World and Win

“I’d rather be a pirate than join the navy.” (Steve Jobs)

Pirates stood for mischief, purpose, and power. And you can, too.

Be More Pirate unveils the innovative strategies of Golden Age pirates, drawing parallels between the tactics and teachings of legends like Henry Morgan and Blackbeard with modern rebels like Elon Musk, Malala, and Banksy. Featuring takeaway sections and a guide to building your own pirate code 2.0, Be More Pirate will show you how to leave your mark on the 21st century:

Whatever your ambitions, ideas, and challenges, Be More Pirate will revolutionize the way you live, think, and work today and tomorrow. So what are you waiting for? Join the rebellion.

View on Amazon
How to innovate for the future... Be More Pirate! This author has done a great job of making me think outside the box in business and try things a different way. Really great writing and has some interesting correlations between Golden Age Pyrates and modern life. Great price for Kindle Version as well :) Have asked my library to order this for the public!

I received this book before the estimated delivery. The only thing I’m bummed about is this seller used a sticker that doesn’t come off easily so part of the cover ripped when trying to get the sticker off. I’ve skimmed through the book and it looks like it’s going to be a good read. I’m excited to get started.

Sam is definitely a pirate, becuz he stole my money when I bot this book. The text reads like an essay in which the author's only concern was inflating the word count.

I am loving this book and only on chapter 2... I was already thinking this way and this book was nothing short of confirmation that I'm on the right path!

Co-founder and former CEO of Livity, Don’t Panic, and Live magazine takes historical examples from the Golden Age of Pirates and a few modern examples to show how emulating pirates can make you more successful and the world more fair. The Golden Age Pirates got their start in the Navies of the British Empire. Even attacking ships for loot was Privateering sanctioned by the crown. The Pirates took this and went independent. They added Quartermasters that other navies would adopt and was a prelude to modern Human Resources. They paid out for injuries, something the modern world didn’t have for work until the 20th century. Pirate shares for loot and electing captains led to a Pirate Republic in Nassau.
These lessons provide a road map for the enterprising pirate. They show how Pirate radio challenged the BBC and illegal music downloads led to I-tunes. Turning a mutiny into a movement as the author suggests. Every step of the way you can use Pirate tips to shake up the status quo, from a global brand like the skull and crossbones (thank you Calico Jack) to retelling your pirate tales to make a legend for others to live up to (Blackbeard). Full of fun and helpful examples at the end of the chapters the reader is invited not to just read, but to participate.
Lest you think that it is all walking the plank and stealing booty there are also tips on building a team using the Pirates fairness initiatives. Pay for bonuses like seeing the first ship on the horizon. Using Pirate shares as a model for fair pay. A culture that discourages internal theft. Then scaling so the world has to follow you. Modern Social Entrepreneurs can harness their passion as a competitive advantage. Learn why Steve Jobs said “I’d rather be a pirate than in the Navy”.

Possibly the best business book I’ve read. And I read too many, though most get swept aside before I finish. Well written and thoughtful.

One of the greatest things is you learn the history of pirates in a way that will appeal to many while the ideas there are connected to business and societal situations. A kind of action/reaction thing but really that’s the wrong analogy.

And there’s work to do, but not laborious. Just a question at the end of each section to help you find ways to make good trouble.

Buy this book... if you don’t like the content then it will still look cool on the shelf because it’s bright pink.

I'm flying through 'Be More Pirate' at the moment, having heard the author speak on the Reasons to be Cheerful podcast. What a liberating, and engaging, read it has been so far (I'm as far as part 6. Reorganize Yourself.) It's made me realise that a lot of the guilt I have felt about my various acts of rebellion over the years might just show that I'm a little bit pirate. I was told at school that I had a problem with authority, I never bought into that, I have a problem with the abuse of authority, so I always felt that was an unfair label.

Having to recall my first act of rebellion bought to mind something I hadn't thought about for years. At school, a fellow pupil had my basketball whilst I was in a lesson and it was confiscated because they were bouncing it in the halls. I found the teacher who had my ball and something about his complete dismissal of me sparked something inside me. I ended up in an office with the teacher in question, and the deputy head, both shouting at me. I remember a moment of great clarity as the two adults raised their voices at me as I calmly said: "I don't see the need for you shout at me, can we not discuss this like adults?"...admittedly, I was 16 so not technically an adult!

The end result was that, the next day, the teacher in question apologised to me and said it had been a clash of personalities. Although I didn't challenge any rules, or make a change for the better, in this case, it was eye-opening for a teacher to apologise to me as an equal. It's only now, years later, that I recognise the courage it took to stand up to authority as I did, at the time I felt immense guilt over speaking out-of-turn to power. The system reinforced that, as I was chastised by my head of year, regardless of the teacher's apology.

I've left three jobs over the last five years. A couple in finance and one working for a family business run by people interested in profit, and very little else. For various reasons, but all to do with poor management and unfair practices, I've tried to change inefficient practices at all of these organisations, but was met with ignorance, anger or simple apathy. I started to wonder if I wasn't just a troublemaker after all, and should get back in my box and shut up. Fortunately, that isn't something I am capable of doing.

'Be more pirate' has given me an alternative way to interpret my behaviour and experiences. I'm training to become a journalist now, hoping that I can make a positive change and challenge the status quo through my writing. Keep up the good work!

An Antidote To Modern Living - The best book I've read so far this year! If we put some of the pirate psychopaths to one side, the pirates had a code which in the in the 17th century would have have been revolutionary in it's day, it is certainly even in the 21st Century, which other organisation has a policy that:-
Supports same sex marriage right down to rights on the death of a spouse?
The Captain (CEO) can only earn more than 6 times the lowest deck hand?
A diversity policy, after all, anybody can be a pirate?
A check and balance to decision making, while the Captain was the CEO the quartermaster had a same level of authority and could vote against the Captain? Be more pirate offers an antidote to modern living, actively asking you to break the rules, but only if you make better ones to go in their place. If you want to live in a better world, then maybe you should be more pirate!

I was disappointed with this book. It is chaotically structured and poorly written. That’s a shame as it does contain some nice gems of information.

Was recommended on stage by a climatologist. However as with many 'self help books' it suffers from telling you little with too many words. The history of Pirates is good and I am sure the conclusions are interesting. Unfortunately I got so bored of being told, in the next chapter.. Or by the end of this book... and then a series of self congratulatory filler I gave up.

Wasn't totally sure about how I was going to like this from the cover but I thought it was a terrific read. I read a lot of business books & I found this one of the best - a joyous romp through bits of history interspersed with huge numbers of stories, insights and ideas which were properly inspirational. Fun but also extremely serious in the points it makes. Get it, enjoy it, be more pirate.

Sam makes the case that the Golden Age Pirates have had their story mis-told. They are in fact, the role models we’ve been looking for: fighting for justice, equality, and freedom! Fun, outlandish and a fresh take on how, inspired by pirates, we might work and live in stormy times. 8/10

They called me disruptive at school

I thought it was a criticism then, and knew that the teachers and the institution didn’t see what I see now - and you capture so well in the book I’ve been shouting about for the last 4 weeks

Rules? They’re for other people. If do m things differently was easy, they wouldn’t need me!

Thanks for reminding me what I’m all about. I’m in!

Ben - a noisy pirate causing no end of good trouble in the midst of corporate healthcare!

I can't think of a business book that got me smiling as much as this did. I loved it!

The Maslow hack was spot on and it was good to see the Great British Diversity Experiment got a mention.

In short, the book has made me more determined to #BeMorePirate!

This was recommended to me and is an easy read with some big ideas. Not sure I’m going to be a pirate king, but hoping I can make small but significant changes in the way I work with and manage teams.

Good book. Very original with a good message. As with many books of its ilk, it carries a very simple message (grass-roots disruption and causing ‘good trouble’). Labours the point a bit towards the end.

One of the best books I’ve read; interesting, insightful and if you allow it, will change how you look at your day to day life. I would, and have recommended it to all my friends.

Its a great book but i bought it to learn how to be a “pirate” manager. Instead I feel I learned more about pirate society.

Bought as a gift. First book my OH has read in 6 years. Usually only reads online so must be good as he's read cover to cover in one day

Incredibly thought provoking and therefore not always a comfortable read!
Want to change your life?
Read this!